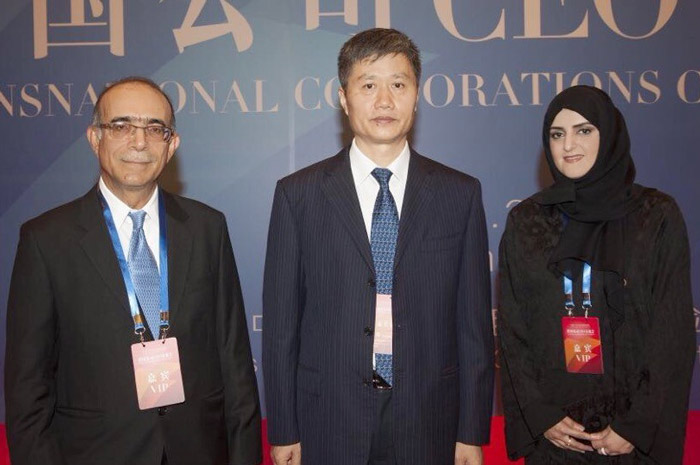 Dubai – MENA Herald: The Dubai Airport Freezone Authority (DAFZA) recently signed a Memorandum of Understanding (MOU) with China (Guangdong) Pilot Free Trade Zone (GDFTZ) – Nansha Area of Guangzhou (Nansha FTZ), which is aimed to further enhance bilateral cooperation between the two parties. The landmark agreement was signed by Nasser Al Madani, Assistant Director General, DAFZA and Pan Yuzhang, General Director of the General Affairs Office of GDFTZ and the Chief Economist of the Administrative Committee of the Nansha Economic and Technological Development Zone, in the presence of He Zhongyou, Vice-governor of Guangdong Province; Zheng Jianrong, Director General of the Commerce Department of Guangdong Province; Amna Lootah, Assistance Director General – Finance and Commercial, DAFZA, and other senior officials from both sides.

The MoU signing was attended by the CEOs of several multinational corporations that were participating in the recently held China (Guangdong) Pilot Free Trade Zone Multi-National Corporation Summit in the Nansha District of Guangzho, the capital and largest city of Guangdong Province in southeastern China, under the theme ‘New Rules, New Concepts, New Opportunities: The Construction of the Pilot Free Trade Zone and the Development of Multinational Companies. The event was attended by senior representatives from the Government of Guangdong and CEOs of multinational corporations like Toyota, Eton, L’Oreal, as well as other international companies.

Under the terms of the MOU between DAFZA and Nansha FTZ, both parties will collaborate on expanding bilateral trade exchange; promote mutually-beneficial investments and business partnerships as well as cooperation in information technology, cross-border e-commerce and shipping logistics; exchange expertise and experiences in planning, strategy, general operations and employment models; and engage in other areas of cooperation they jointly agree on. This strategic agreement will help in further advancing the implementation of China’s Belt & Road Initiative, a development strategy launched by the Chinese Government to foster economic cooperation among countries along the proposed Belt and Road routes. The strategy has aided the countries engaged in the initiative in achieving USD 100 billion as value of cooperation.

DAFZA’s agreement with Nansha FTZ will consolidate their respective strengths as leading free trade zones to mutually pursue business and investment growth. It also positions DAFZA as a major contributor to the Belt & Road Initiative which aims to extend China’s global commercial ecosystem and reenergize the trade routes of Central and West Asia, the Middle East, and Europe.

The new partnership complements the promotion of the strengths of DAFZA as an effective trade and economic partner for the business community and for global investments, particularly with China and the rest of Asia. This complements DAFZA’s own ongoing global expansion strategy to reach new and promising markets as part of efforts to drive economic growth in Dubai and the UAE.

After the signing ceremony, DAFZA delegates toured the Guangzhou Nansha Economic and Technological Development Zone to examine the Nansha port and learn more on the most important services and facilities offered as well as its expansion plans and the strategic role it plays in supporting China Belt & Road Initiative. The delegation also visited Pearl Bay Museum – Nansha’s future museum that embodies the Nansha 2025 Plan to become a focal area of the ‘Silk Road’ through the outlets and commercial infrastructure and innovative aspirations, which is backed by Nansha’s geographical and strategic features that can address the growing needs of the community’s business and investment activities in Asia and the rest of the world.

The delegation concluded its visit with a better understanding of the Chinese experience in the e-commerce sector, led by the Nansha FTZ through its high efficiency work and innovative technology, in addition to individual logistics services and operating innovative models.