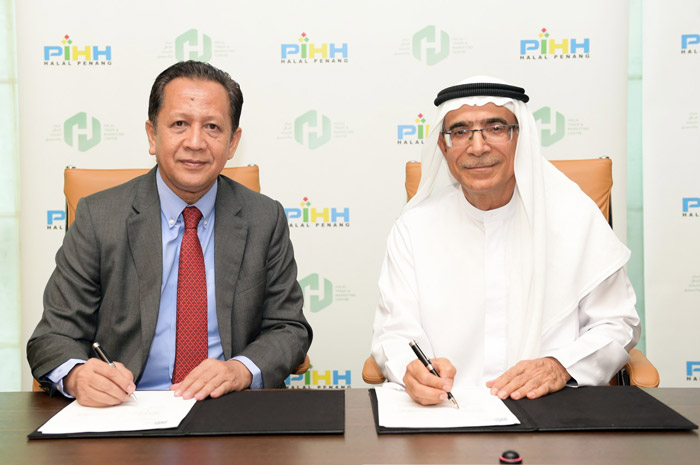 28 April 2019, Dubai, United Arab Emirates: Dubai Airport Freezone Authority (DAFZ) has signed a Memorandum of understanding (MoU) with the Malaysian Penang International Halal Hub (PIHH), to establish a framework of cooperation between the two sides. The agreement will provide the Halal Trade and Marketing Centre (HTMC) with a range of world-class services, supporting companies and businessmen locally, regionally and globally.
The MoU was signed during an official ceremony held at DAFZ head office in Dubai, and attended by Nasser Al Madani, Assistant Director General at DAFZ, and Dato’ Haji Abdul Halim Hussain, State Minister for Domestic and International Trade and PIHH Chairman, in addition to officials and employees from both sides.
The Halal Trade & Marketing Center, which was launched in October 2018 by DAFZ provides an integrated range of services across the Halal industry, supporting international companies and businessmen to access this fast-growing market. It also helps companies to better understand the main trends and opportunities in this market as well as the regulation, allowing for better decision making within operations.
PIHH is an agency fully owned by the Government of Penang State in Malaysia. It provides the platform for numerous initiatives aiming to support the local and international Halal industry through regional and international partnerships with stakeholders. Since the 18th century, Penang has been considered a global trade hub, thanks to its strategic location within the Malacca Strait and the Indonesia–Malaysia–Thailand Growth Triangle (IMT-GT), which represents an emerging economic zone with 90 million inhabitants. This triangle is part of theASEAN , which in turn is a vital market and home to 620 million people.
The MoU adds PIHH to HTMC’s list of partners, allowing PIHH to provide companies growth support services, in addition to linking them to ASEAN markets, namely the IMT-GT, and vice versa to the GCC region.
Nasser Al Madani, Assistant Director General at DAFZ, said: “This MoU falls in line with the strategic objectives of DAFZ, aiming to support the Emirate of Dubai’s efforts to establish itself as a global hub for the Islamic economy and the Halal industry. It’s also part of our commitment to enhancing the services provided by HTMC to companies within this fast growing industry.”
He added: “We have agreed on this MoU and a framework for cooperation following a series of meetings and visits, which allowed us to identify the advantages that PIHH will bring and the growth support services it provides. The agreement will also allow us to share knowledge and gain further expertise across the diverse Halal sector. PIHH will support HTMC with services that will complement its efforts in supporting the growth of Halal industry in UAE and the wider region.”
Al Madani pointed out that the MoU is in line with DAFZ’s strategy for Islamic economy, which includes three main themes and 20 strategic initiatives. “DAFZ continues its efforts to achieve these strategic objectives by supporting qualitative initiatives, in order to attract more foreign direct investment into the Islamic economy sector. It will also enable us to explore investment opportunities and utilize them to their full potential,” he added.
Dato’ Haji Abdul Halim Hussain,State Minister for Domestic and International Trade and PIHH Chairman said: “Penang and Dubai, both are situated at strategic economic locations. Penang has ready access to Southeast Asia (ASEAN) market and it is at the centre of the One Belt One Road (OBOR) region with strong business eco-system, sizable international talent pool, efficient logistics networks and services. This has made Penang and PIHH the destination of choice for investors, manufacturers, traders globally to operate their businesses from and making it a hub to export their products and services. PIHH as the main hub and a gateway for Halal Industry in the Southeast Asia (ASEAN) region will be a major contributor to the growth of Dubai as the global gateway for Halal Industry located in the middle east. The collaboration between PIHH and HTMC will create great synergies and contribute towards greater achievements in the global Halal Industry as a whole.”
The trade volume between UAE and Malaysia in 2016 was recorded at AED 15.4 billion meaning that the UAE remains the largest GCC trade partner for Malaysia.
HTMC aims to develop businesses opportunities within the Islamic economy for manufacturers, suppliers and distributors of the Halal economy products and services. This is achieved by facilitating services in three key categories which are growth support services, Halal compliance services, and market intelligence services. The Center is supported by the main strategic partners operating within the Islamic economy. These partners provide world-class services to boost the Center’s offerings.