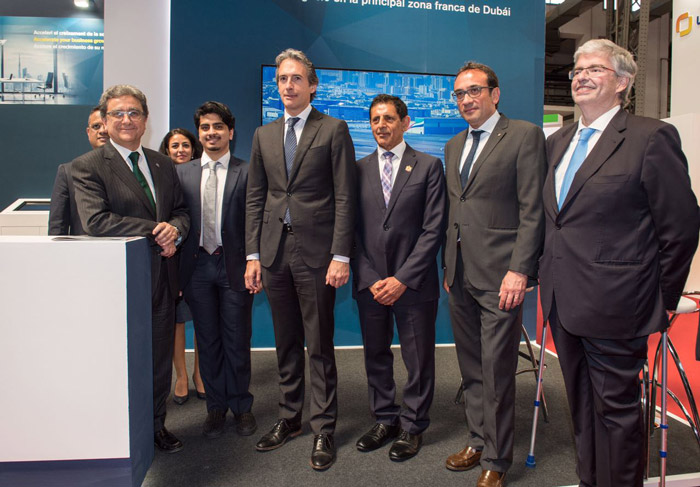 The Dubai Airport Freezone Authority (DAFZ) participated at the 19th International Logistics and Material Handling Exhibition (SIL) in Barcelona, Spain. Íñigo de la Serna, Spain’s Minister of Public Works and Transport; Josep Rull, the Catalan Minister of Territory and Sustainability; Jordi Cornet, President of Barcelona Free Zone; and H.E. Salem Rashid Al Owais, UAE Consul General in Barcelona, inaugurated DAFZ’s pavilion during the exhibition. DAFZ’s participation in the event aimed to help increase foreign direct investment (FDI) opportunities between the Freezone and investors from Spain and the other participating countries.
During its participation, DAFZ organised a seminar on foreign investments under the theme ‘Boost your business from Dubai to the World.’ It featured the UAE’s strong economic performance, Expo 2020-related opportunities, and the region’s rising logistics sector. DAFZ, one of the world’s most competitive free zones, took the opportunity to present its broader range of investment incentives, distinct and diverse business offerings, and successful efforts to establish good relations with foreign investors from Europe and the rest of the world. To date, an estimated 27 per cent of the total companies operating in DAFZ are from Europe.
DAFZ’s officials also met with high-level officials from the Chamber of Commerce in Barcelona and the Barcelona Foundation for Halal Services to discuss cooperation and support among parties. DAFZ presented investment opportunities for the Catalan business community as well, which will give them an access to the Middle East and Central Asia markets through Dubai and DAFZ particularly. Dubai is considered the main gateway for international companies seeking to establish their export, import, and re-export businesses in the UAE and the rest of the region. In this regard, DAFZ delegates discussed how it could assist investors through its comprehensive business solutions and state-of-the-art facilities, especially in terms of logistics and transport support.
Further, the DAFZ delegation highlighted Dubai’s economic development; growing foreign direct investments in Dubai and the rest of the country supported by their wise leadership and pioneering initiatives; and the economic power that government and semi-government institutions impose. DAFZ said it is keen on attracting Catalan business leaders, noting that Catalonia is a major contributor to Spain’s gross domestic product (GDP). According to statistics, Catalonia accounted for about 20 per cent, or an equivalent of 223.6 billion euros, of Spain’s total GDP in 2016.
Abdulaziz Al Hammadi, Manager of Marketing, DAFZ said: “DAFZ took part in this global exhibition to attract the Catalan business community as part of our full support for the UAE’s economic diversification policy over the past 20 years of Dubai Airport Freezone’s success. A number of leading international companies, including top Spanish businesses, have chosen Dubai, a regional business hub, as the center of their operations in the Gulf, the Middle East, and Asia.”
Trade relations between the two countries have witnessed significant growth over the past 14 years, where trade exchange exceeded USD 2 billion in 2014, while it rose to USD 2.6 billion in 2015. Statistics also indicate that the UAE is the first destination of Catalan exports in the Gulf region and the Middle East.
“During the international event, we also highlighted the importance of the new DAFZ Industrial Park, which is designed to attract vital industrial sectors as well as the ongoing early sales procedures that allow investors to get involved as early as now in the interior design of the units according to their operational needs and maximize benefits and services,” said Al Hammadi, adding:
“The increasing halal sector was also one of the main highlights of our discussions as we showcased the industry’s numerous export opportunities.  Dubai, which is the global capital of the Islamic economy, will enable foreign investors to reach more than 2.5 billion people in the regional market in a span of 5 hours maximum time.”
Since its inception 20 years ago, the Dubai Airport Freezone Authority has been attracting foreign direct investments from high-value sectors, which are helping drive the economic growth of Dubai and the UAE. Today, it is home to multinational Spanish corporations, including TESA, FERMAX, TUBACEX, NATURA BISSE BARCELONA, IKUSI and PHIBO, and other leading international companies.
Moreover, DAFZ has played a key role in attracting investors from all over the world from different sectors including logistics and building materials, especially with the remarkable growth achieved by this sector in Dubai, which is attributed to the role of the emirate as a golden gateway for multinational companies seeking to import, export and re-export domestic and foreign within the UAE.
The Barcelona International Logistics and Transport Fair, organized by the Consorcy ZF International S-IU, is a global meeting point for logistics industry professionals. It attracts key exhibitors and thousands of visitors from around the world, providing bridge between the European market and the Latin American, North African, Middle Eastern, and the Mediterranean Basin markets. More than 600 companies and institutions, 45 per cent of which were international firms, joined the exhibition’s 19th edition. The participants included organizations from various sectors, including transport and logistics, infrastructure, real estate, warehousing and equipment, information, electronics, and information and communications technology.