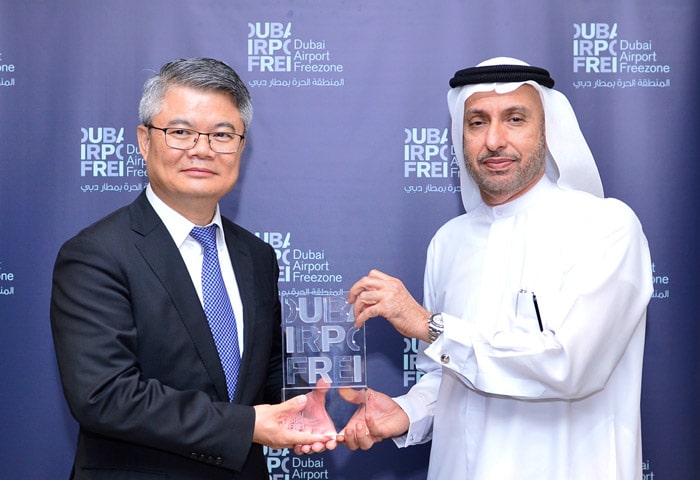 ​Dubai, UAE – November 24, 2019: Dubai Freezone Authority (DAFZ), represented by Director General, His Excellency (H.E.) Dr. Mohammed Al Zarooni, and a number of officials this week welcomed a delegation from the Bank of China, led by Executive Director of the Board Mr. Lin Jingzhen and senior delegates. The meeting took place at DAFZ Square Business Center to discuss future collaboration and business prospects. ​

During the visit, the Chinese delegation learned about DAFZ’s experience over the last two decades in attracting and increasing foreign direct investment. This has played a vital role in developing sustainable economic growth in Dubai, driving business across more than 20 key sectors. The delegation also heard about DAFZ’s latest services that are offered to international companies, particularly Chinese companies that are based in DAFZ.

The Chinese delegation was briefed on key strategic projects and initiatives led by DAFZ. These projects include Dubai CommerCity, the region’s first, dedicated e-commerce free zone, and Dubai Blink, which aims to explore the future of global supply chains and trade by establishing world’s first and largest trading platform for companies.

The DAFZ team also learned about the services and incentives provided by the Bank of China and discussed how the free zone can cooperate with the Bank through these services. They aim to enhance the benefits offered by DAFZ to clients and companies operating in the free zone. They learned about how the Bank can support business in the UAE in general and Dubai in particular, as well as its regional expansion plans. ​

H.E. Dr. Al Zarooni commented: “China is DAFZ’s third largest trading partner, representing 15.7% of trade at a value of AED 12.3 billion in the first half of 2019. DAFZ has played an influential role in Dubai’s economy and non-oil foreign trade, which supports the vision of the Dubai government in driving economic and commercial growth. DAFZ is committed to providing support and investment incentives to Chinese companies looking to set up their businesses and manage operations from Dubai.”​

“Some of the key drivers for success over the past two decades include the development of partnerships and international cooperation. We look forward to further consolidating our relationships in the interest of both parties and in supporting Chinese companies to expand their businesses in the MENA region through DAFZ,” added Al Zarooni.

DAFZ continued to further strengthen the ties with China through a series of initiatives focused on expanding bilateral trade and investments. The free zone signed a Memorandum of Understanding (MoU) with Liaoning Chamber of Commerce UAE to increase the collaboration between the two organizations and help create new business and investment opportunities with Liaoning province.​