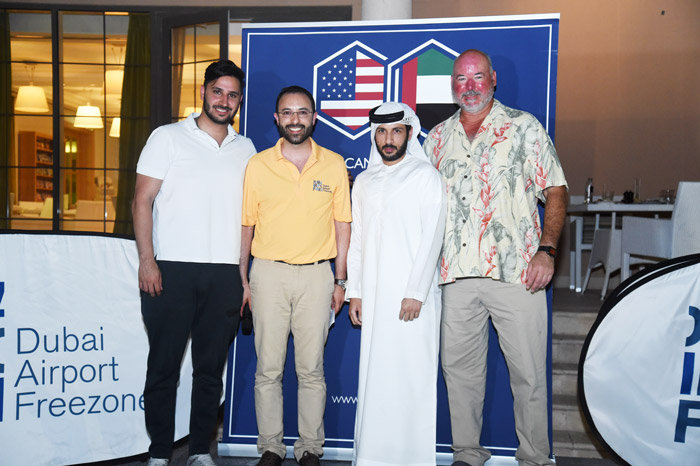 The Dubai Airport Freezone Authority (DAFZA) was the Title Sponsor of the Golf Tournament of the American Business Council of Dubai and the Northern Emirates (ABC Dubai) held at the Jumeirah Golf Estates. The event – considered a platform for local and global stars of the sport – was attended by several investors and venture capitalists, members of ABC Dubai, and amateur and top professional golf players. It concluded with an Awarding Ceremony which honored participants who achieved remarkable scores.

DAFZA is an active contributor to the sporting world as the freezone. It previously signed an agreement with the Dubai Sports Council last year to collaborate on initiatives for maintaining the health and well-being of its clients, employees and community members. The freezone’s sponsorship of the ABC Dubai Golf Tournament forms part of its continuous efforts to promote a culture of happiness and well-being and confirms its full commitment to social responsibility.

Commenting on the sponsorship, Abdulaziz Al Hammadi, Manager of Marketing, DAFZA, said: “DAFZA’s Sponsorship of the Tournament comes as part of its 2017-2021 Strategy which complements Dubai Plan 2021. It affirms our concern for the well-being of society and our dedication to help ensure a better future marked by success, excellence and dignity. There was a business dimension to our participation as well, as our delegates shared some of DAFZA’s achievements which have left a positive impact on the national economy and the growth of foreign investment. Our representatives highlighted the freezone’s exclusive offerings – including a strategic location, advanced infrastructure, high safety standards, pioneering technology-enabled services and a focus on innovation to better empower foreign investors. They particularly reached out to American entrepreneurs who wish to set up a regional base in Dubai to achieve their goals.”

Al Hammadi added: “Over the last 20 years, DAFZA has successfully built outstanding relations with the American business community. This led to enhanced financial outcomes and the growth of our hosted American companies in 2016, which adds to our string of achievements that have reflected positively on the growth of overall investments in the Emirate of Dubai.”