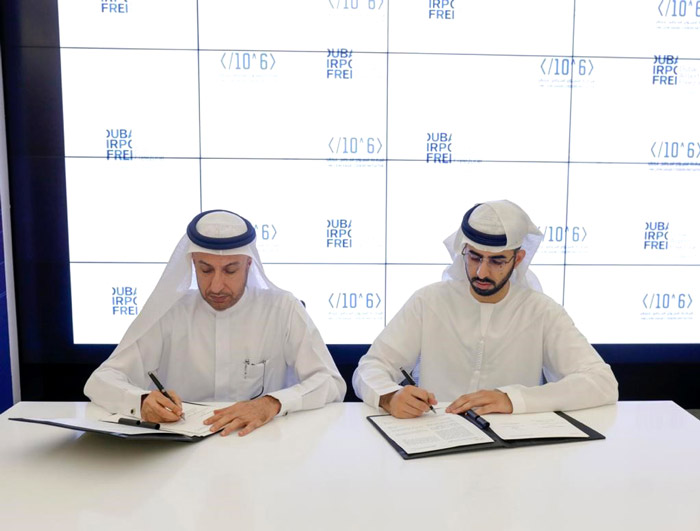 In collaboration with Dubai Airport Freezone, “One Million Arab Coders” allows 50 graduates to establish companies in Dubai
Dubai Future Foundation (DFF) announced signing a Memorandum of Understanding (MoU) with Dubai Airport Freezone (DAFZ) to support the graduates of the One Million Arab Coders initiative, launched by His Highness Sheikh Mohammed bin Rashid Al Maktoum, Vice President and Prime Minister of the UAE and Ruler of Dubai. The initiative was launched to prepare a generation of technical experts by training one million Arab youth on programming, building their capacities to serve future needs, and contributing to the development of the digital economy; the economy of the future.
The MoU was signed by His Excellency Omar Sultan Al Olama, Minister of State for Artificial Intelligence and Deputy Managing Director of DFF and His Excellency Mohammed Al Zarooni, Director General of DAFZ.
The MoU aims to support software developers from the One Million Arab Coders program, through a range of projects and programs to encourage them to apply the skills they learnt. It also aims to provide a joint workspace for the 50 graduates to establish their own companies through the DAFZ Innovation Program, and provide facilities for entrepreneurs, such as issuance of licenses and visas, preparing halls for meetings, and organising events. DAFZ will organise annual events to strengthen relations between companies and graduates and open direct communication channels with them. The MoU also aims to provide graduates with job opportunities at institutions and companies located in DAFZ.
“Our partnership with DAFZ supports the vision of His Highness Sheikh Mohammed bin Rashid Al Maktoum, Vice President and Prime Minister of the UAE and Ruler of Dubai, who launched this pioneering initiative to empower Arabs in language of the future and prepare the next generation of programmers, in the UAE and the region. The program develops their abilities, increases their expertise in advanced science, enriches their knowledge, and offers scientific training to help them master programming language to keep pace with the rapid changes in the labour market and the digital economy,” said Al Olama.
“Our strategic partnership with DFF’s One Million Arab Coders program is part of our belief in its lofty mission to promote Arabs and revives their future. His Highness Sheikh Mohammed bin Rashid Al Maktoum’s vision has broad horizons that are not limited by geographical or social boundaries and positively looks forward to the future. Here comes our national institutional duty to support the objective of this initiative, which will enhance the labour market to keep pace with the future, support innovation, and smart transformation. This will also upgrade the system of the digital economy through high competitiveness, and challenge other cities with distinguished Arab competencies who master the language of the future,” said Al Zarooni.
The One Million Arab Coders program witnessed the graduation of approximately 13,000 students in its first session. The program is one of DFF’s initiatives, in cooperation with the Hussain Sajwani – DAMAC Foundation, the strategic partner, and the supporting partners Udasity, Mostaqbal and Bayt.com. It aims to empower Arab youth by providing them with jobs in modern technologies, and preparing them with essential skills and knowledge. It also aims to develop their abilities and increase their expertise in advanced science and offer scientific training to help them master programming language. This contributes to the development of the Arab region, encourages innovation and leads to a positive change by instilling hope in the youth.
Those who are interested to participate can apply on the website: http://www.arabcoders.ae