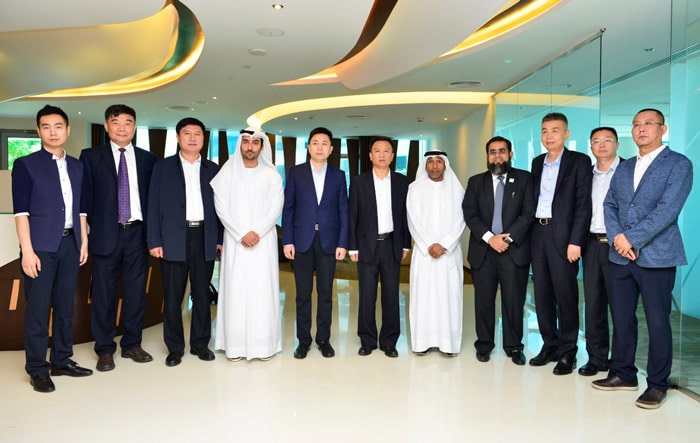 Dubai, United Arab Emirates, , 2019: Dubai Airport Freezone Authority (DAFZA), one of the UAE’s leading free zones, has stepped up efforts to attract new business and foreign direct investment (FDI) from China following official Chinese delegation visits this week.
Jamal Bin Marghoob, Senior Director of Sales at DAFZA along with  senior officials welcomed the delegation from the China Council for the Promotion of International Trade Sichuan Council (CCPIT) was represented by Mr. Yang Shibo, Minister of the Association and another delegation from the Sichuan Provincial Department of Agriculture and Rural Affairs, which was led by Zhang Lyu Ping, Deputy Director General.
The delegations were joined by a number of Chinese companies which aim to better understand investment policies, economic and trade regulations and to explore opportunities for cooperation. The delegations were given a tour of DAFZA’s facilities and were also introduced to the free zone’s services and project updates, including presentations on Dubai CommerCity, the region’s first e-commerce dedicated free zone and DAFZA’s Halal trade initiatives.
A key point of discussion during the visit was the One Belt, One Road (OBOR) initiative and how it will benefit both UAE and Chinese businesses. The OBOR Initiative is a $900 billion policy initiated by the Chinese government to build on ancient trade routes from China through central Asia by rail (Belt) and to Africa and beyond by sea. The initiative covers 69 countries which make up 60 per cent of the world’s population and 40 per cent of global gross domestic product (GDP).  Trade activity between the UAE and China, both part of the OBOR initiative, amounted to $33 billion (Dh121 billion).
Jamal Bin Marghoob commented: “The UAE and the Republic of China have held strong strategic relations politically, economically and socially for many decades. The UAE recognizes China as one of the most prominent economic forces in the world. With the implementation of the Belt and Road Initiative between China and UAE, Sichuan is at the frontier of China’s future economic plan.
“We see big opportunities for cooperation between China and the UAE across a range of strategic sectors including trade, logistics, science, technology, tourism and aviation. Dubai is a transportation hub connecting Asia and the rest of the world and we believe that greater collaboration between Sichuan and DAFZA will bring significant benefits to businesses on both sides,” added Marghoob.
DAFZA has invested in a number of strategic initiatives to help support Chinese businesses set up in the free zone. These include DAFZA signing a new partnership with Liaoning Chamber of Commerce UAE. The Memorandum of Understanding (MoU) will increase the collaboration between the two organizations and will help create new business and investment opportunities with Liaoning province. DAFZA also previously signed an MoU with China (Guangdong) Pilot Free Trade Zone (GDFTZ) – Nansha Area of Guangzhou (Nansha FTZ) and hosted roadshows in the Shenzhen province and Guangzhou in China during April 2018. The roadshows led to a significant amount of new company appointments with several high potential leads for new companies looking to invest in DAFZA.
DAFZA is home to several prominent Chinese companies including Huiteng (Middle East) FZE, Hytera Communications FZE, Junhou International FZCO, Northwell, China Southern Airlines Branch and Oriental Sky Aviation FZE among others.