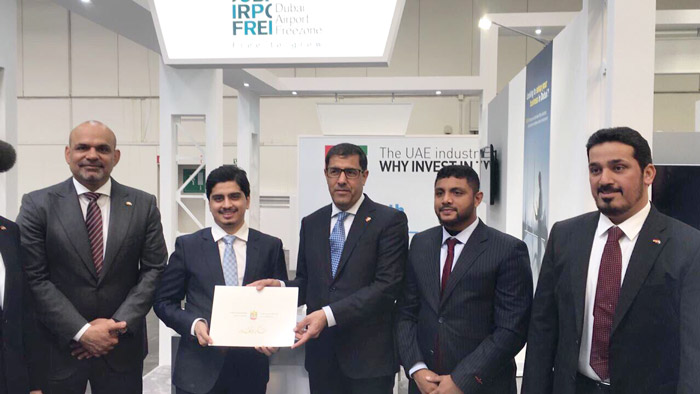 UAE, April 25, 2017 – The Dubai Airport Freezone Authority (DAFZ) announced its participation with the UAE pavilion at the latest edition of Hannover Messe, the world’s largest manufacturing industry trade fair which kicked off on Monday, April 24, 2017 and will continue until April 28, 2017 in Hannover, Germany. DAFZ is holding bilateral meetings with top automotive and digital companies that are looking to expand their business in the UAE and particularly Dubai this year, to maintain their presence in the UAE and take advantage of Dubai’s position as a business hub.

On the sidelines of Hannover Messe 2017, DAFZ’s delegation will participate at the UAE Investment and Business Forum which will host a seminar highlighting the UAE’s readiness to attract investments. The group will focus on DAFZ’s major potentials and competitive advantages that meet the requirements of regional and international investors. It will also shed light on DAFZ’s leading status as one of the most innovative and competitive freezones in the world, backed by huge trade and investment opportunities offered to current and new customers. This comes after numerous successes achieved in terms of strengthening relations with foreign investors, particularly those from Europe, which have positively impacted the share of German companies working in DAFZ. German enterprises currently constitute 21 per cent of the total number of European companies in the freezone. The delegates will also discuss DAFZ’s positive influence on the UAE’s economic growth and investment attractiveness.

Jamal Bin Marghoob, Director of Marketing and Corporate Communications, DAFZ, said: “Participating as part of the UAE delegation at Hannover Messe 2017 reinforces our pivotal role in the development of the UAE economy and reaffirms our full support for national economic diversification policies over the past 20 years. It also reflects the successful investment relations we have built which have transformed DAFZ into a hub for leading international companies, several of which are German organizations which top our list of investing European countries in terms of rented office and industrial spaces, collectively accounting for 11 per cent”.

“Through Hannover Messe 2017, we look forward to answering all investor questions, showcasing DAFZ’s latest services and offerings, shedding light on the freezone’s new industrial zone, and sharing how investors can leverage the many investment incentives and benefits we offer”.

Since its establishment 20 years ago, DAFZ has focused on attracting Foreign Direct Investments (FDIs) from high-value business industries in leading active markets to drive economic growth across Dubai and the UAE. The freezone presently plays a vital role in attracting investors from the automotive industry which has been thriving in Dubai with 39 per cent growth since 2010, and of which 90 per cent are importers. Automotive sales are expected to reach 1.5 million units in 2017, with a CAGR of 9.1 per cent in the GCC region. These positive results are mainly attributed to Dubai’s position as a gateway for multinational companies seeking import, export and re-export activities within the UAE.

Established in 1947, Hannover Messe is one of the largest industrial events in the world. Each year it welcomes thousands of exhibitors and over 736,000 visitors from 53 countries gathered within a space of over 496 thousand square meters housing 27 showrooms.