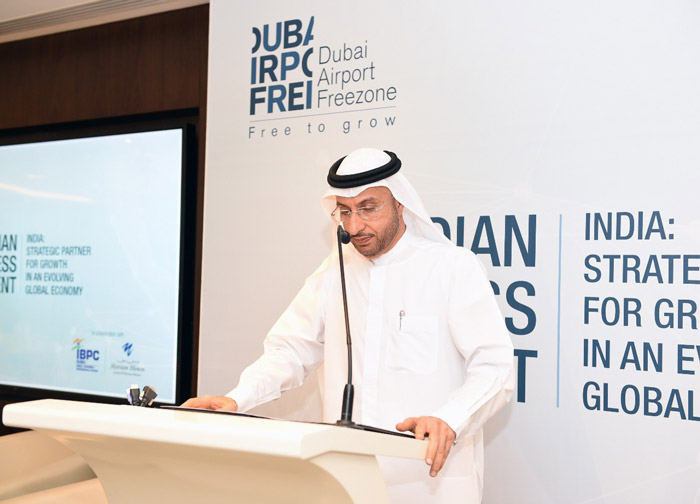 The Dubai Airport Freezone Authority (DAFZ) has organized a special forum for Indian businesses under the theme ‘India: A Strategic Partner for Growth in an Evolving Global Economy’ in the presence of H.E. Dr. Mohammed Al Zarooni, Director General of DAFZ, H.E. Vipul, Indian Consul General in Dubai; Bindu Chettur, President, Indian Business Professional Council-Dubai and board members of the IBPC; and several other prominent figures and representatives of government agencies and leading Indian companies.

The event was held yesterday (Sunday, May 21, 2017) at the DAFZ Business Center in cooperation with IBPC – Dubai and Morrison Menon. It complements India’s exceptional investment drive and is expected to attract more new investors to Dubai as a regional hub for their business in the Middle East, in line with Dubai Plan 2021’s goal of making the emirate a global investment hub.

The forum forms part of DAFZ’s efforts to help achieve the vision of the wise leadership to provide an ideal working environment supported by advanced infrastructure at par with the highest international quality standards for the benefit of the freezone’s strategic partners. It also supports the new era of cooperation between India and the UAE, as part of regular interactions between the countries’ senior officials.

The event was launched by Dr. Al Zarooni, who said: “DAFZ always strives to be a pioneer in supporting the country’s growth and attracting more investments, and emphasizes the depth of its commercial relations with its strategic partners and hosted international companies, in line with the successful development of relations between the UAE and India which was further heightened by the recent visit of H.H. Sheikh Mohammed bin Zayed Al Nahyan, Crown Prince of Abu Dhabi and Deputy Supreme Commander of the UAE Armed Forces to India. We are witnessing stronger cooperation between our countries, which signed 14 bilateral agreements last January. DAFZ works with a united team to expand our initiatives and provide the best solutions and facilities to attract more investments and maintain our strong relationship with the Indian business community, which reflects positively on the economic growth between the UAE and India.”

In response, H.E. Vipul, Indian Consul General in Dubai, said, “The long standing relationship between the UAE and India dates back to more than 4,000 years ago–making it not only historical but also one of the longest partnerships between countries. We would like to extend our thanks to DAFZ for organizing this event, which highlights Indian-UAE relations across different levels. I would also like to point out the significance of the contributions made by both the political and diplomatic relations of both countries–promoted by official visits between the leaders of India and the UAE to promote the development of trade cooperation and the exchange of information and experiences to help drive in mutual growth and economic diversification. Today, we have achieved key figures in trade for the two countries, reaching USD 50 billion in 2016, which is expected to grow by 60 per cent in the next three years, especially across strategic segments like technology, energy, the digital economy and smart services, wherein the UAE is acknowledged as a pioneer in. India is working hard to provide more services and expertise to attract more UAE investments and facilitate knowledge exchange in various fields. Today, the country is one of the world’s largest and fastest growing economies.”

Bindu Chettur, President, Indian Business Professional Council-Dubai, said, “Today, India is known as one of the world’s largest economies and is forecasted to be ranked fifth in the world by the year 2025 in terms of large economy and rapid growth. The country is currently undergoing efforts to further develop its infrastructure of roads and transportation while also reinforcing its presence in digital economy and electronic commerce–a move that necessitates its cooperation with the UAE, which is both a pioneer and a leader in this area. Our cooperation with the UAE in general and Dubai in particular, remain highly important in terms of innovation and the use of modern technology. In addition, the ties between India and the UAE should further be strengthened across other key industries like health, food safety and the move to increase mutual investments–to diversify both economies and help drive in more growth for the two countries.”

During the meeting, major points were discussed regarding the role of Indian and UAE investments in the growth of the global economy, and how to enhance investment relations between the two countries. Participants also touched on broader cooperation to achieve the aspirations of- and provide support for- Indian businessmen and investors in establishing new businesses and advancing the success of existing ones. Innovation was a major part of the discussion because of the important role played by DAFZ’s innovation plan, which is aimed at enhancing its services for the benefit of existing customers. Other important topics were tackled in open dialogues, with brainstorming sessions leading to key recommendations that can be beneficial to the economy of Dubai and the UAE in general.

As part of its robust relations with the Indian business community, DAFZ is exploring investment opportunities through promotional tours; meetings with major Indian companies, investors and venture capitalists; innovative economic solutions that drive commercial growth and diversification; and enhancements to the UAE’s role in the development of the international economy. An example of these activities can be seen in the series of intensive workshops being organized by DAFZ, including the recent workshop on how to maximize profits for small and medium-sized companies, which comprise 70 per cent of the companies in DAFZ that are owned or managed by mostly by Indians.

To date, DAFZ is developing services to help start-ups and attract more Indian businessmen and investors—working closely to help identify new standards and guidelines aimed at attracting investment to the emirate.

Ties between India and the UAE have been growing significantly as reflected by the annual increase in the number of Indian companies which now account for 34 per cent of the total number of Asian companies based in the Dubai Airport Freezone.