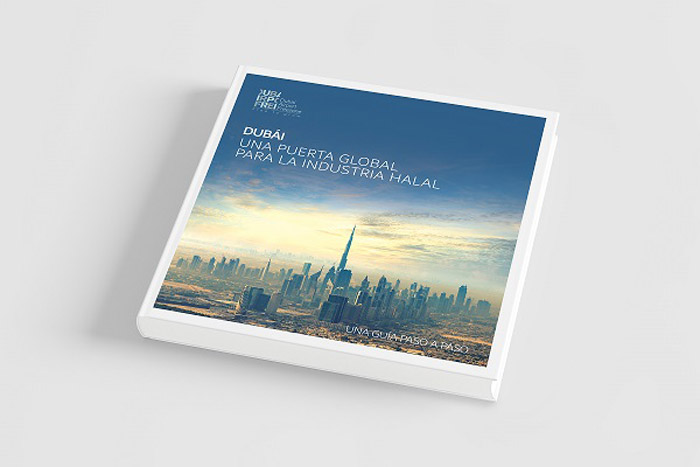 Dafza launches Dubai Global Gateway to Halal Industries: Your Guide is a Step by Step Guide in Spanish

Dubai Airport Freezone Authority (DAFZA) has announced the launch of the first-of-its-kind guide entitled ‘Dubai: The Global Gateway to Halal Industries’ in Spanish. The launch is one of a number of official initiatives that form part of Dubai’s Islamic Economy Strategy for 2017 to 2021.  The ceremony was attended by HE Salem Rashid Al Owais, General Consul of the UAE in Barcelona and Ramon Senmartin, General Director of Prodeca, Local Ministry of Agriculture, Government of Catalonia, with the presence of DAFZA representatives and a number of investors and participants from the Halal industry in Europe at the exhibition.

The launch of this Guidebook by DAFZA is one of the most important initiatives for the Halal sector and is supported by the Dubai Islamic Economy Development Centre in cooperation with Knowledge Partner DinarStandard. The Consulate General of the United Arab Emirates in Barcelona translated the Guide into Spanish, which aims to raise the awareness of Spanish investors on the opportunities within the Halal sector, both regionally and globally. It also aims to educate the investors on the Halal system in the UAE including certification and accreditation, the National Halal Mark and solutions for businesses to set up operations.

The Halal sector is rapidly growing both in Europe and globally with more than 1.7 billion consumers, equivalent to a quarter of the world’s population and is expected to reach 2.2 billion by 2030. Halal products account for about 16% of global food and beverage consumption contributing around 40 billion euros to the European economy.

Commenting on the participation, Amna Lootah, Assistant Director General – Finance, Commercial & Customer relations Division Foster of DAFZA Innovation & Future Unit said: “The Launch of the guide in several prominent global languages in the world aims to reach as many investor as possible in key markets which have witnessed growth within their Halal sectors. This falls in line with our mandate to support the country’s economic diversification plans by attracting new foreign investments to Dubai. The guide will play an important role in educating foreign  investors on the rewarding investment opportunities that the sector presents, with the aim to encourage them to enter the market.”

The Guidebook includes recommendations and information on the Halal sector’s strategic features to enable foreign investors to explore the Halal market in Dubai. The Guidebook includes procedures, standards and services provided by governmental entities, highlighting the smooth system formulated by the UAE and Dubai to enhance the experience of foreign investment into the sector. It also showcases success stories of four leading companies within the Halal industry including Abbot Laboratories, Hershey’s, Natura Bisse, and Spanish Kits.

H.E. Salem Rashid Al Owais UAE Consul-General in Barcelona, has emphasized the importance of UAE companies participating in such important international events, as it supports in attracting FDI to the UAE. He praised DAFZA’s role in supporting ‘Dubai: The Capital of Islamic Economy’ initiative and the Halal food and beverage sector.

H.E. Al Owais noted that Catalonia is one of the largest industrial food sectors with its size surpassing 10 billion Euros in 2017, which represents around 18% of the total GDP of the region, making it a great opportunity for UAE companies to expand.

“Catalonia is currently the first European agri-food cluster. It is a highly dynamic sector that prioritizes quality, traceability and food safety. It is a sector very open to internationalization and with an export growth of 100% in the last 10 years, said Ramon Senmartin, General Director of Prodeca, Local Ministry of Agriculture, Government of Catalonia.

Adding: “From the Government of Catalonia we work jointly with the United Arab Emirates to expand and consolidate the marketing channels of agri-food products with Halal certification in this market and its area of influence. As part of this collaboration, we have presented the DAFZA Guidebook and the Halal Club Catalonia Food project in Barcelona, with the aim of offering instruments that facilitate Halal production and certification for companies, as well as access to these Halal products for consumers of the national and international market. The Halal sector is currently one of the most dynamic in the global agri-food sector, and we are working to set Catalonia as a benchmark in this market. “

The Guidebook also sheds light on the factors that make Dubai one of the most innovative, futuristic destinations for business, including its sustained GDP growth, strong performance in financial indicators, ease of doing business and trade openness. As well as highlighting the increasing passenger rates at Dubai International Airport, detailing the rise in number of travelers, tourists and visitors.

It provides its readers with ten reasons Dubai has been appointed as a major business hub. The reasons include its strategic location, diversified economy, growing FDI and advanced aviation sector. It focuses on Dubai’s global infrastructure that supports operations management, its sophisticated financial center and its role as a regional hub for many international companies. The Guidebook also details Dubai’s security and cultural elements, workforce capabilities, in addition to a number of reasons why people choose to live in the Emirate.