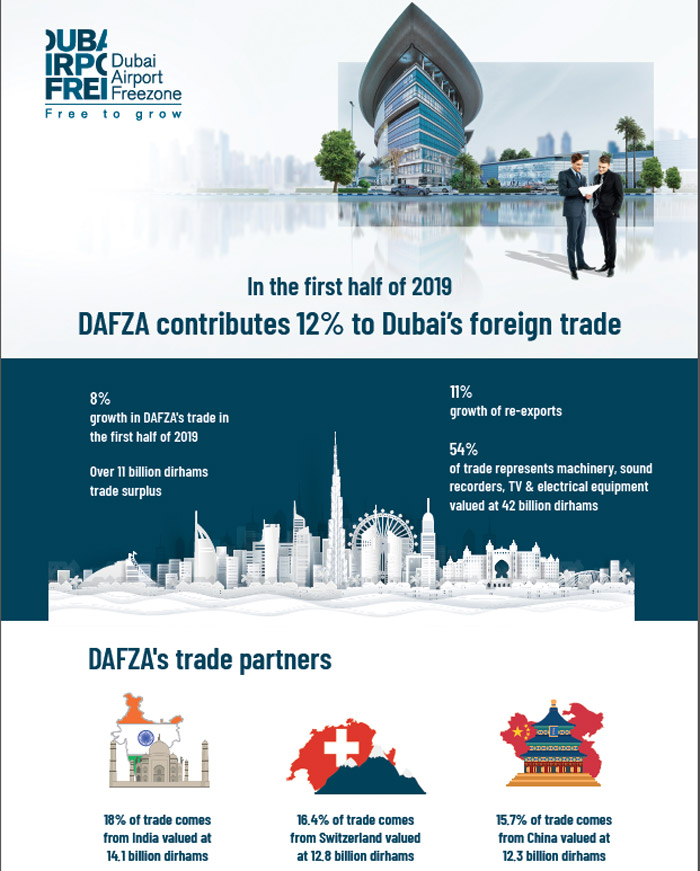 13 October, 2019: Duba​​i – United Arab Emirates:​​ Dubai Airport Freezone Authority (DAFZ) has further established itself as a global facilitator for business growth and prosperity and a vital engine for Dubai’s economy following the announcement of its half year results for 2019. DAFZ’s contribution to Dubai’s foreign trade reached 12% in the first half of the year, confirming the success of its plans to enhance its role in Dubai and to establish its presence amongst the free zones as one of the most developed, advanced and distinguished at the national and regional levels.
The results of the first half of 2019 confirmed the success of DAFZ in achieving high growth rates compared to the same period last year, where it achieved a growth of 8% in the total value of foreign trade which exceeded AED 78 billion, an increase of 5.7 billion AED. This was driven by an 11% growth in re-exports, which reached a value around AED 45 billion, representing 21% of the total re-exports in Dubai. For the second consecutive year, the free zone also achieved a large trade surplus of over AED 11 billion in the first half of 2019, a growth of 35% compared to the same period last year.
A vital supporter of Dubai’s economy
His Highness (H.H.) Sheikh Ahmed bin Saeed Al Maktoum, Chairman of DAFZ, said that the results of the first half of 2019 confirm the status of the free zone as a major contributor to the UAE economy in general and the emirate of Dubai in particular. The results also highlight its strategic role in facilitating global trade through Dubai, which is a key gateway for various countries and continents around the world and is a meeting point for routes linking East, West, North and South.
H.H. Sheikh Ahmed Bin Saeed added that these results are a reflection of the free zone’s efforts to increase foreign direct investment (FDI) to the emirate and sustain its business growth. This reaffirms the initiatives of Dubai’s leadership and government in stimulating economic activity and adapting to the economic fluctuations the world is facing, from trade tensions to slowdown in global growth. He explained that it is a visionary and a strategic move to ensure the stability and growth of business and to maintain a high-level of confidence for investors in the emirate. DAFZ’s growth over the past two decades is a confirmation of its role in achieving the Emirate’s objectives and strategic plans of economic diversification away from dependence on oil according to a clear economic vision for the future.
H.E. Dr. Mohammed Al Zarooni, Director General of DAFZ, commented that DAFZ has continued to play a key role in enhancing the growth of Dubai’s economy, through its solid plans which ensure that the free zone is home to major international companies, as well as ambitious small and medium-sized companies planning to expand across the UAE and the region. Al Zarooni added that the results of the trade movement through the free zone are a direct reflection of the positive image and confidence placed by foreign companies and investors in DAFZ and is an important milestone that showcases the various elements that ensure the ease of trade.
Trade partners and vital sectors
India accounted for the highest percentage of DAFZ’s trade with 18% at AED 14.1 billion, followed by Switzerland with 16.4% at AED 12.8 billion. China accounted for 15.7% with AED 12.3 billion. Switzerland topped the list of countries in terms of re-exports from DAFZ by 27%, valued at AED 12 billion, a growth of 16% compared to the same period last year. India ranked first in terms of its contribution to the imports of DAFZ and accounted for 41%, valued at AED 13.8 billion with a 16% growth compared to last year.
In terms of types of goods, DAFZ witnessed a great diversity from various industries where the group of machinery and electrical equipment ranked first with 58% of the total re-export value of 25.7 billion AED, an increase of 15%. Furthermore, this sector accounts for 48% of total imports worth AED 16.2 billion. This was followed by pearls, semi-precious stones and metals with 35% of the total re-export value of AED 15.5 billion and 43% in terms of total imports worth AED 14.5 billion. Both sectors represent 92% of DAFZ’s total trade.
A home for leading international companies

​In 2019, a number of international companies opened their regional headquarters in DAFZ or expanded their facilities to serve customers across the region. Among these highlights includes Airbus expanding its business with the opening of its first Africa and Middle East Cabin Electronics Service Centre. The facility will serve local and regional carriers as well as customers in India and Turkey, which includes repair and spare part services for cabin components and systems as well as customer onsite technical services such as cabin system training. The Centre will provide greater flexibility for Airbus customers with spare parts being maintained closer to airlines’ operations, taking the advantage of the strategic location of DAFZ.

TNA, a leading global supplier of integrated food processing and packaging solutions, has opened its new regional headquarters in DAFZ. The new facility will allow TNA MENA to offer a range of after-market services to customers in the region, including enhanced technical support, a new training and demo centre, and easier access to spare parts.
Michelin, the world leader in tire design, manufacturing and distribution, has also opened its regional headquarters in the free zone to manage its operations in Africa, India and the Middle East. Managing 87 offices across the regions, the HQ will allow the leading international tire company to further develop and expand its regional operations. The opening was a result of the confidence of one of the largest international companies in the services provided by the free zone that best fit its business model.
DAFZ is committed to providing all forms of support to foreign companies that are planning to operate within the free zone. DAFZ offers a wide range of services, facilities and unique management practices that enable companies to take advantage of its strategic location and tax exemptions, as well as the advanced infrastructure, logistics services, and flexible business environment it offers.