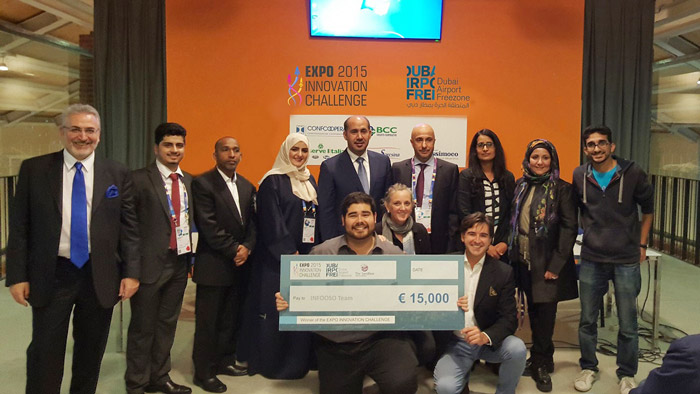 The Dubai Airport Freezone Authority (DAFZ) has announced the inaugural batch of winners of the first-ever EXPO Innovation Challenge 2015 held recently under EXPO Milan 2015. The announcement was made during the prestigious awarding ceremony held at the closing of the latest World Expo in the presence of international decision-makers and diplomatic figures – including H.E. Saqr Nasser Al-Raissi, UAE Ambassador to Italy; Dr. Mohammed Al Zarooni, Director General of DAFZ; and Mubarak Al Dhaheri, Director of the UAE Pavilion at Expo Milano 2015. Other high-level delegations from Milano and around Europe were present as well. Amna Lootah, Assistance Director General – Finance and Commercial, and other representatives from the Authority also attended the ceremony.
The elite roster of winners comprises three teams chosen out of 100 contestant who were congratulated during the prestigious awarding ceremony held at the closing of the latest World EXPO. The Grand Champion, “IN FOO SOO,” a solution focusing on smart and innovative warehouse designs, received a cheque for EUR 15,000, while the First Runner Up, “Farm Hero,” received EUR 5,000. Additionally the teams will also have the opportunity to undergo six months of mentorship and assistance on business incubation provided by renowned industry experts and prestigious European institutions.
Dr. Al Zarooni said: “EXPO Innovation Challenge 2015 proved to be an ideal international platform for attracting top-notch creative individuals capable of developing innovative technologies. It succeeded in supporting international efforts to find working solutions for the world’s food security challenges. The Challenge comes at a time when innovation has the world’s utmost attention as the ideal method for achieving the objective of building a safer and more sustainable future. We are pleased to have contributed to this valuable initiative which aligns with both our core corporate values and the top strategic priorities of the UAE which is taking proactive steps to be among the most innovative nations in the world by 2021.”
“The success of the inaugural EXPO Innovation Challenge provides a valuable blueprint for Dubai as it prepares to host the next World Expo under theme of ‘Connecting Minds, Creating the Future.’ We are confident that the upcoming edition will have greater contributions, especially in terms of employing creative minds to advance ongoing efforts to create a better world for present and future generations. We congratulate the winning teams who showed outstanding excellence and leadership in coming up with new and innovative solutions and technologies that have the potential to leave positive impacts on food security,” he added.
DAFZ’s official delegation headed by Dr. Al Zarooni visited the UAE pavilion, where they were briefed on the innovative solutions relevant to the EXPO Milano 2015 theme of “Feeding the Planet, Energy for Life,” as well as the Emirate of Dubai’s ambitious plans for the future as depicted by the documentary film on “Expo Dubai.” The DAFZ head commended the people responsible for the pavilion for representing the country in the best possible manner and attracting strong international interest in World Expo 2020 which will be hosted by Dubai. The delegation also toured the national facilities and pavilions on the sidelines of their visit to the EXPO.
“This event was an excellent venue for us to show the world the UAE’s great heritage, rapid progress and ambitious visions for the future. We also had the chance to highlight UAE’s key strengths in terms of infrastructure, ‘smart’ technology adoption, and its stature as a business-friendly investment hub. We were also able to share the important role of freezones in stimulating economic growth, trade, foreign investment and employment at the domestic and international levels”, Al Zarooni concluded.
EXPO Innovation Challenge 2015 in Milano which was powered by The Sandbox – The D. Company gathered a group of 100 developers, designers and entrepreneurs from around the world chosen from a highly competitive pool of 480 applicants. Contestants opted either to propose purpose-driven technologies and solutions related to EXPO 2015’s theme of ‘Feeding the Planet, Energy for Life’ or work on a real-life case study related to innovation within the food industry value chain developed exclusively by DAFZ, the Premium Sponsor of the event.